Today we Celebrate #WorldElephantDay: a day dedicated to the preservation and protection of elephants around the world!

In the early 1900’s, there were an estimated 100,000 captive elephants in Thailand and around the same in the wild. Now in 2017 there are an estimated 3,500 captive elephants and roughly a 3,000-3,500 wild elephants. In Thailand the primary habitat of Asian elephants is mountainous forest but throughout their range they also inhabitant grassland and scrubland habitats. Elephants are essential to a healthy functioning ecosystem. They spend most of their time (about 15 hours a day) foraging and grazing, and travelling around 9km each day. The seeds dispersed by elephant’s movements are vital to the health and survival of their forest home.

In Thailand, as almost everywhere in Asia, the main threat is the loss of habitat. As human populations expand, wild elephants are condemned to live closer to cities and human habitations. They are also victims in world of animal exploitation, most of the captive elephants in Thailand are confined to cruel inhumane elephant camps, where they are forced to give back breaking ride to tourists until the day they drop. The ivory trade is the biggest threat to the African bush elephant and the African forest elephant and is still a major threat to the Asian Elephant. The international trade in Ivory was banned by CITES in the late 1980’s but these laws have been relaxed on a number of occasions, flooding the market with newly imported African elephant ivory. This makes it even harder to monitor the illegal ivory trade. The trade of ivory and body parts from domestic Asian elephants in Thailand is legal as they still fall under the Draught Animal Act 1939.

Sadly, habitat loss and the ivory trade are not the only threats elephants have to face. Even if elephants have been revered cultural icons throughout Asia for centuries, they are increasingly exploited for tourism purposes. They are used for rides and are trained to perform tricks. A wild elephant would never let a person jump on him and would never play football, or paint. To get this kind of result, men resort to a very violent process. Everything starts with separating the wild baby from its mother. Then comes the Phajaan, which translates as ‘separate extremely’, a process which leads to breaking the soul of the animal. It is a very harsh treatment involving starvation, sleeping deprivation, bull-hook use and beating. It has been a tradition for centuries in Asia. Initially, elephants were used by the military or for logging. Now they just entertain tourists who, for the most part, are not aware of what those wild animals went through: torture!

Riding elephants causes terrible long term harm to their spine, legs, and hips. A whole life spent carrying people and acting in a circus is a cruel existence for highly intelligent, majestic and sociable wild animal. This is why WFFT has rescued and nurtured back to health many mistreated elephants from all over Thailand: to give them a beautiful retreat. And today is a perfect day to pay an homage to one of them who is no longer with us: the very special Namfon. 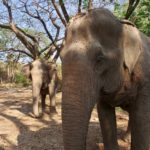 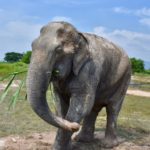 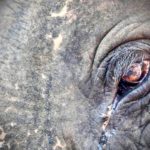 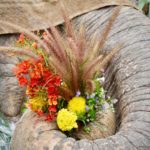 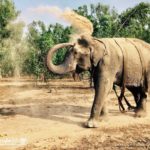 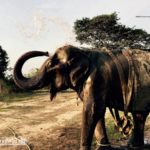 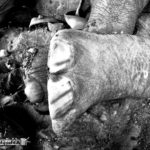 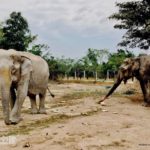 Namfon was a female elephant who spent most of her life carrying tourists in various elephant camps throughout Thailand. It is most likely that she was poached from the Wild as an infant, witnessed her mother and other herd members being butchered, was sold to the logging industry, and later to the tourism industry. She had been in elephant camps giving rides to tourists each day for the last 5 years, when WFFT took her on. The camp from which she came from is notoriously known to be a highly abusive place for elephants. Namfon’s trusting nature and calm demeanor enlightened the lives of many. She inspired us and the many people who met her to strive for a better future for the 1000’s of elephants that still languish in captive environments throughout Thailand. She gave us hope to continue to fight for their freedom. The years of abuse she endured never dimmed her light. She experienced more freedom during the last few months of her life than in her entire life.

We know we mentioned this before, but we need to insist: she was the sweatiest Diva ever. She spent her last moments on this Earth freer than she ever was: going wherever she wanted to go, doing whatever she wanted to without having to worry about what humans wanted her to do. And she decided to leave when she wanted to, not when we were expecting her to do so. In peace, with the people who really cared about her. She inspired and changed the lives of so many lucky ones who got the chance to know her. May her story help other exploited animals, and remind why preservation and conservation are so important.

Thank you free spirit! May no other elephant go through what you lived for the most part of your life and may the World give back to elephants the place they used to have and deserve. Thanks to those working to protect and preserve them, thanks to people dedicated to this mission and thanks to all of you for being aware of the situation and stop riding elephants, not going to circus shows and watching elephant tricks. Please stop buying products from illegal poaching and killing of these beautiful animals.