Jum Nong Gets a New Chance of Life

On a recent trip to Pattaya to check out Boon Dee the WFFT Elephant Rescue team also examined another elephant that was in a dreadful condition. Jum Nong we were told was 53, emaciated, covered in wounds and old abscesses and her young mahout clearly did not have the experience to care for her.

We examined her sleeping area which was filthy, had no shade or water and it was evident to the team that she could not digest her food properly. We learned that she had collapsed on several occasions yet was still having to work. A saddle placed on the knife ridge of a back must have been excruciatingly painful for her as she trekked all day with tourists on her back. The team desperately wanted to help this poor old girl but there was a problem.

The owner initially wanted a ridiculous amount of money for her which would have been irresponsible to pay. After much negotiation we finally managed to agree an amount and a donation was received (Thank you Dr. John) to allow us to bring her to WFFT for treatment and released her from the hell that was her life.

Having agreed to pay some money up front and the remainder to secure her forever freedom later, the WFFT team time set up a fundraiser and ensure she never has to return to enslavement. Thanks to the numerous generous kind souls around the world Jum Nong now faces a much brighter future.

On the morning of her rescue the team were at the camp bright and early in preparation for the long day ahead. They unshackled her chains for the last time as she was loaded on the truck. What looked a very inadequate ramp turned out to be ideal as Jum Nong almost jumped into the truck. It was as if she was desperate to be out of this hell hole and knew the team were there to help her.

With the paperwork completed Jum Nong began the long journey back to WFFT Elephant Refuge. She ate almost constantly the entire 6-hour journey, being gently fed and calmed by our experienced mahout Kam. Thankfully the traffic was light as we passed through Bangkok and the weather was perfect. The team were back in Phetchaburi in record time and Jum Nong got her first sight of the haven that she can now call home.

Jum Nong disembarked the truck with the same ease she had entered it and went on her first stroll on Project 4. This large multi species enclosure will be her home for the rest of her life. It is an elephant paradise and just what this old girl deserves.

Jum Nong will spend some time in the elephant hospital. She is infested with lice which the vet team have treated already. We also need to build up her strength and give her a special diet to restore her energy. The Elephant Refuge Team, mahouts and volunteers will chop up her food finely so that she can digest it. She will receive all the love and care she richly deserves and we hope that she will recover and get to enjoy the retirement here she deserves.

We would like to that all the people who donated and made the rescue of Jum Nong possible. She is a beautiful and gentle soul who has suffered at the hand of man for all of her 53 years. You have given her the chance to receive proper care and attention and be spoiled with all the love she deserves. Thank you all. We could not do this without you. Jum Nong’s future is as far removed from her past as it is possible thanks to your generosity. 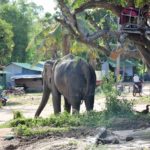 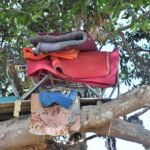 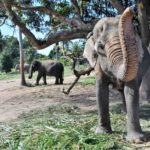 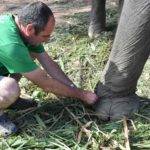 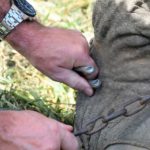 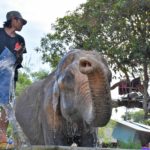